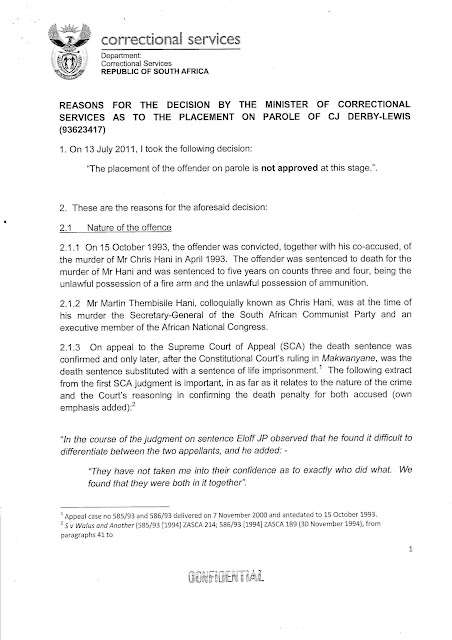 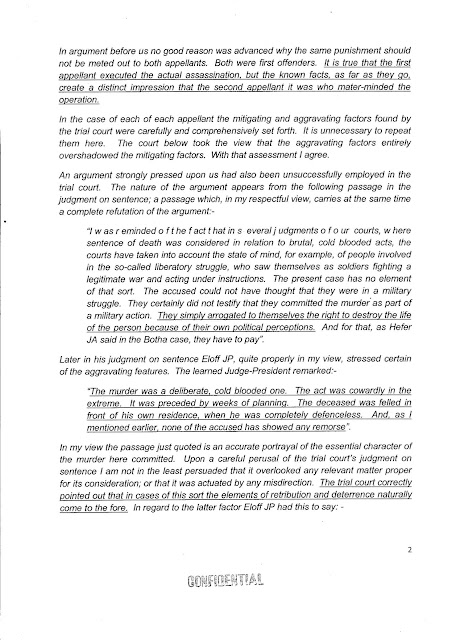 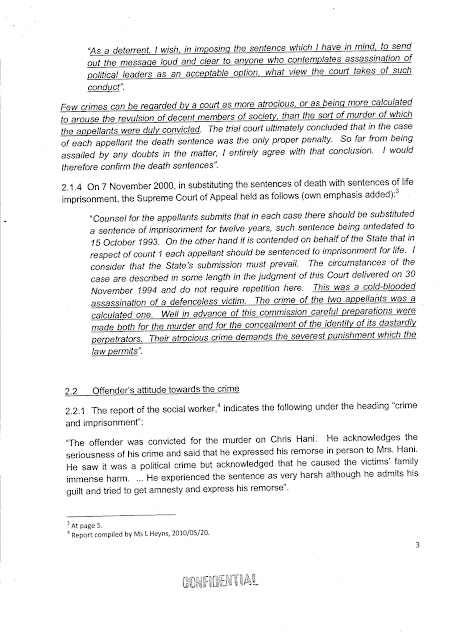 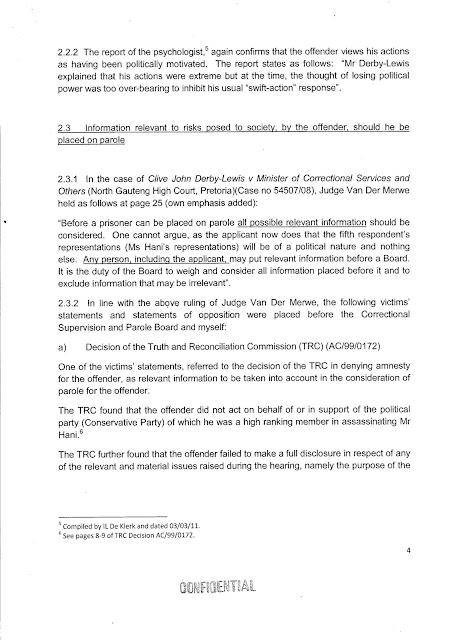 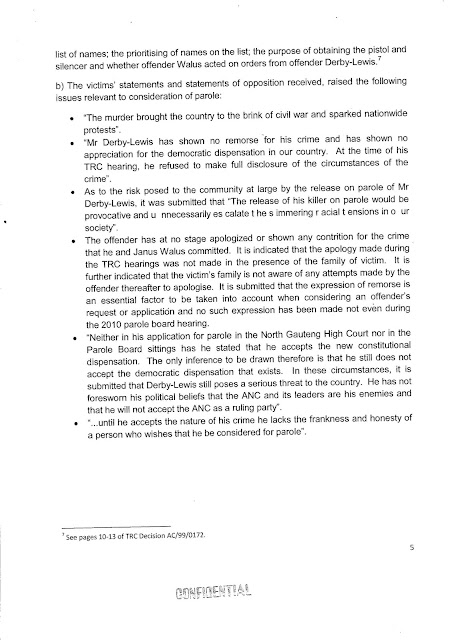 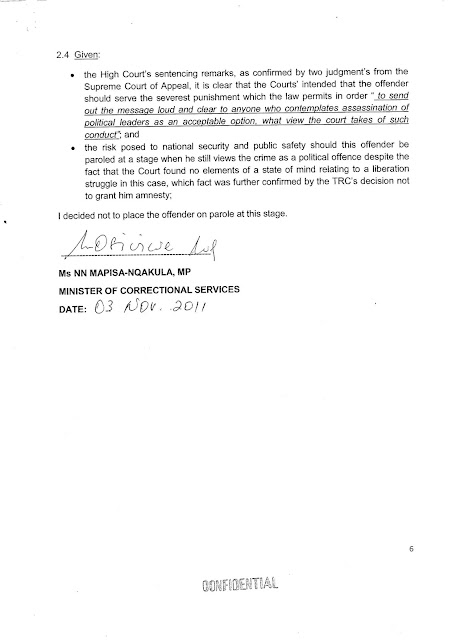 I am not nor have I been involved in political activities for the past 18 years and recently had occasion to distance myself from attempts to involve me in politics. This fact can be confirmed by my lawyer, Mr. Marius Coertze who released the repudiation on my behalf.

the Central Soccer Association, a body organising all league activities of twenty soccer clubs in the Centre.

Email ThisBlogThis!Share to TwitterShare to FacebookShare to Pinterest
Labels: Verklarings

Dear Madam,
It has come to our attention that the DA is apposed to the parole of Clive Derby-Lewis. It is now two years since Clive qualified for parole and as a matter of fact was granted parole in Oktober 2008, but as a result of politcal medeling is still behind bars.
Please explain to us why the DA believe the rules do not apply to Clive Derby-Lewis.
Does the DA not believe that we are all equal before the law? From your statement it would appear that the DA holds a kind of "Animal farm" view of equality: "all animals are equal, but some are more equal than others".
Regards,
Freedom for Clive Derby-Lewis Committee
Posted by Vryheid vir Clive Derby Lewis komitee at 9:29 AM No comments:

JOHANNESBURG (Sapa) - Medical staff caring for Clive Derby-Lewis were still monitoring his gangrenous leg to prevent an amputation, his lawyer said on Monday.
"The right leg was inflamed and still swollen. It is red right up to his hip and it's obvious that he still has some inflammation in the leg," said Marius Coertze of the man serving a 25-year sentence for his part in the murder of SA Communist Party secretary general Chris Hani.
The 74-year-old Derby-Lewis had to undergo two operations after a bump against an iron bed base caused a severe infection in his leg.
While being examined, doctors also found that Derby-Lewis, who has served 17 years, needed treatment for skin cancer and to his prostate.
Coertze said that a second course of antibiotics, "which his doctor said was so strong that it would kill the bugs around the bed too", did not have the result hoped for.
His blood pressure was also high.
According to the department of correctional services, a final decision on whether Derby-Lewis gets parole should be taken by the National Council on Correctional Services at the end of October.
Coertze said the doctor's primary concern was to save his leg, and as soon as his leg was out of danger, they would focus on treatment for the skin cancer and the prostate.
Derby-Lewis had initially been shackled to his hospital bed in a private facility, but the department intervened and had the shackles taken off to help improve his circulation.
Hani was shot dead on April 10, 1993, a year before the first democratic elections in South Africa.
Hani was shot in the head as he climbed out of his car outside his home in Dawn Park, Boksburg, by Polish immigrant Janusz Walus, using a pistol lent to him by Derby-Lewis, a Conservative Party MP at the time.
They were convicted of murder and conspiracy to commit murder, and were sentenced to death.
However, this was commuted to life imprisonment in 1995, when capital punishment was abolished.
Their application for amnesty to the Truth and Reconciliation Commission was rejected on grounds that could not prove it was political and had not made a full disclosure.
An email signed "The Free Derby-Lewis committee" said that if Derby-Lewis was not a political prisoner before, he was now because of what they believe was political meddling in whether he gets parole.
The Free Derby-Lewis committee plan to launch a campaign to get him freed starting with a street braai in Potgieter street in Pretoria on Monday, and then on Wednesday they will send a letter to President Jacob Zuma to have him freed.
The Congress of SA Trade Unions, the Democratic Alliance and the SACP Party are among those opposed to his parole.
Walus was also still serving his 25-year term.

Email ThisBlogThis!Share to TwitterShare to FacebookShare to Pinterest
Labels: Verklarings

Freedom for Clive Derby-Lewis Committee
P.O. Box 690
Rayton
1001
Fax: 086 577 3041
7 October 2010
The President of the Republic of South-Africa
Mr. Jacob Zuma
Fax: 012 323 3231
cc. Embassies of other nations to South-Africa
cc. The media
Dear President Zuma,
“” - OR: WHERE SOME ARE “MORE EQUAL” THAN OTHERS: THE CASE OF CLIVE DERBY-LEWIS
1.       In May 1994, Nelson Mandela was inaugurated as the first President of “ a new ” which would supposedly be “non-racial”, “non-sexist” and free of any discrimination of any kind whatsoever. Few, if any, new governments took office in such a spirit of international euphoria.
2.       The very first section of it’s Constitution states that is “a democracy founded on…human dignity, the achievement of equality and the advancement of human rights and freedoms…”
3.       Sixteen years down the line under is a country plagued by murder; rape; corruption; incompetent administration; unemployment; poverty; disease and a host of other evils. An objective observer cannot but label the hypocritic utterances in the Constitution as tragic jokes.
4.       The very different destinies of two South African men making news-headlines is a case in point.
5.       On the one hand there is Shabir Shaik; during Apartheid an engineering-student (so much for the despised system of “Bantu education”) and, in later years, the businessman closely involved with the ANC. In 2005, he was sentenced to 15 years in prison on counts of fraud and corruption for his role in the multi-billion Rand deal to procure arms for poverty-stricken . After a mere two years of incarceration, the public learned that Shaik is free again; being released as a “terminally ill” man. Shortly afterwards, this same “terminally ill” man was photographed with his luxurious BMW doing shopping; playing golf; and indulging in other niceties of life. The applicable denial, followed by “settling of the dust and forever-after-hold-your-peace”, was the only result.
6.       On the other hand we have Clive Derby-Lewis, during Apartheid a Member of Parliament for the Conservative Party and jailed since 1993 as an accomplice in the murder of Chris Hani (the erstwhile Secretary-General of the South African Communist Party). During his 17 years in prison (and counting), Derby-Lewis has seen countless criminals who were convicted of the most serious crimes - including murder - walk out of prison as free men; either released during the “Truth and Reconciliation Commission”-proceedings; released by Presidential Pardon; or released on parole.
7.       Each and every one of these countless freed men seems to be “more equal” than Prisoner Derby-Lewis who, sick and impoverished at the age of 74, must rely on an attorney who would work free of charge; bringing urgent High Court-applications just to get Derby-Lewis in hospital for life-saving operations.
8.       Derby-Lewis’s own application for release at the “Truth and Reconciliation Commission” failed during the 90’s, on the pretext that he “did not act with a political motive nor made a full disclosure”. The hypocricy and malicious intent of this so-called “Truth- and Reconciliation Commission” could not be demonstrated more clearly than by it’s absurd ruling that Derby-Lewis did not have a “political motive” for his involvement in the Hani-matter.
9.       What else could the motive be? A personal feud? Definitely not, as the two - one a black Communist and the other a white Conservative - did not even know each other on a personal level.
10.    What else? Material gain? Negative again - not even a needle was stolen from the murder-scene.
11.    Fact of the matter is that both these men were professional politicians in a state closely resembling civil war; and without Hani’s political profile, Derby-Lewis would not even have been aware of his existence. Only seriously malicious minds could have come to the “non-political motive” conclusion.
12.    As for the so-called “lack of a full disclosure”, the only “revelation” this has led to is the recent (somewhat embarrassing) explanation for the absence of Hani’s guards on the day of his murder: Hani himself wanted them out of the way in order to be private with his mistress. With all fairness and respect - what could be so important for Derby-Lewis to be kept hidden, that he would rot away in prison during the twilight years of his life rather than making a “disclosure”? It is just as RIDICULOUS an assumption, as the “non-political motive” allegation.
13.    In 2003, Derby-Lewis applied for Presidential Pardon. HE WAS NOT EVEN GRANTED THE COURTESY OF AN ANSWER in this “democracy founded on human dignity, equality and human rights and freedoms”.
14.    In terms of Sections 73 and 78 of the Correctional Services Act, No. 111 of 1998, a person sentenced to life imprisonment may be placed on parole on reaching the age of 65 years if he has served 15 years of such sentence. During 2008, Derby-Lewis qualified and duly applied; and even though his parole was recommended by the Parole Board, he was turned down yet again during the final stages of the parole-process in this “democracy founded on human dignity, equality and human rights and freedoms”.
15.    Currently, Clive Derby-Lewis suffers from gangrene which was neglected by prison-officials to such an extent that he may lose his leg.
16.    Derby-Lewis also suffers from critically high blood-pressure. Furthermore, the sores on his face were medically examined and found to be aggressively cancerous; so deep that it bleeds spontaneously after having been neglected for years.
17.    WE, THE PEOPLE whom Clive Derby-Lewis served during his whole life and for whom he sacrificed everything – WE CAN NOT AND WILL NOT TURN OUR HEADS AWAY WHILE HE IS BEING TRAMPLED UPON in this so-called “democracy founded on human dignity, equality and human rights and freedoms”. If Clive Derby-Lewis should die in prison, his martyrdom shall stand with thousands of other martyrdoms as a symbol of our oppression, and it shall reverberate through decades to come.
18.    In terms of Section 82 of the Correctional Services Act, the President of South Africa may at any time authorise the placement on…parole of any sentenced prisoner and he also may remit any part of a prisoner’s sentence.
WE DEMAND THAT FOR CLIVE - NOW!!!
- Freedom for Clive Derby-Lewis Committee (FCC)
Posted by Vryheid vir Clive Derby Lewis komitee at 3:24 PM No comments:

Email ThisBlogThis!Share to TwitterShare to FacebookShare to Pinterest
Labels: aksie

Should Clive Derby-Lewis be freed